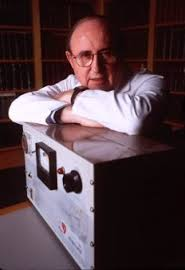 Image courtesy of The Lown Institute

In 1961, Lown developed the DC defibrillator.  Lown conducted extensive animal research to define a less traumatic and more effective form of electric shock to fibrillate the heart.  This work resulted in what became known as the “Lown waveform”; a single heavily damped sinusoidal waveform with a half cycle time of approximately 5 milliseconds.

Lown passionately believes that physicians are natural advocates for the sick, the poor, and the afflicted.  In the early 1960s he was a founder of Physicians for Social Responsibility (PSR), and became its first president.  The PSR organization helps educate and protect millions of people on the medical consequences of nuclear war, and the threat to global society from climate change and environmental toxins.

In 1981 he co-founded, with Dr. Yevgeny Chazov from the Soviet Union, International Physicians for the Prevention of Nuclear War (IPPNW).  His peace activities have been recognized with a UNESCO Peace Prize, the Cardinal Medeiros Peace Award, the Gandhi Peace Prize, some 20 honorary degrees, and the Nobel Peace Prize, which he accepted in 1985 on behalf of IPPNW.

Stevoe and Lown discussed that the threat of nuclear war is no longer our biggest concern.  Lown stressed that climate change now is bigger than the nuclear threat, because nuclear wouldn’t destroy all life.

Lown is the founder and emeritus Chairman of SATELLIFE, an international non-profit organization that uses satellite and Internet technologies to serve the health communication and information needs of developing countries.  Lown is also the founder of ProCor, an ongoing, worldwide e-mail and web-based electronic conference that addresses the emerging epidemic of cardiovascular diseases in the developing world.

Founded in 1971, The Lown Institute seeks to “create and foster a new social contract between the profession of medicine, the business of healthcare, and civil society.”