You would think that the Director of Tourism in Maine would be a native Mainer, but maybe it’s more fitting that it’s someone who experienced Maine as a tourist first. Carolann Ouellette is “from away,” but was recently profiled as one of “50 Mainers Boldly Leading Our State” in Maine Magazine. She grew up in New Jersey and summered in Maine. She graduated from Cornell’s Hotel Administration program and moved to Maine to become the owner/chef of a restaurant in Jackman. Her passion for the outdoors (skiing, snowmobiling, fishing, hiking, etc.) has taken her all the way to her current position: Director of the Maine Office of Tourism (MOT). 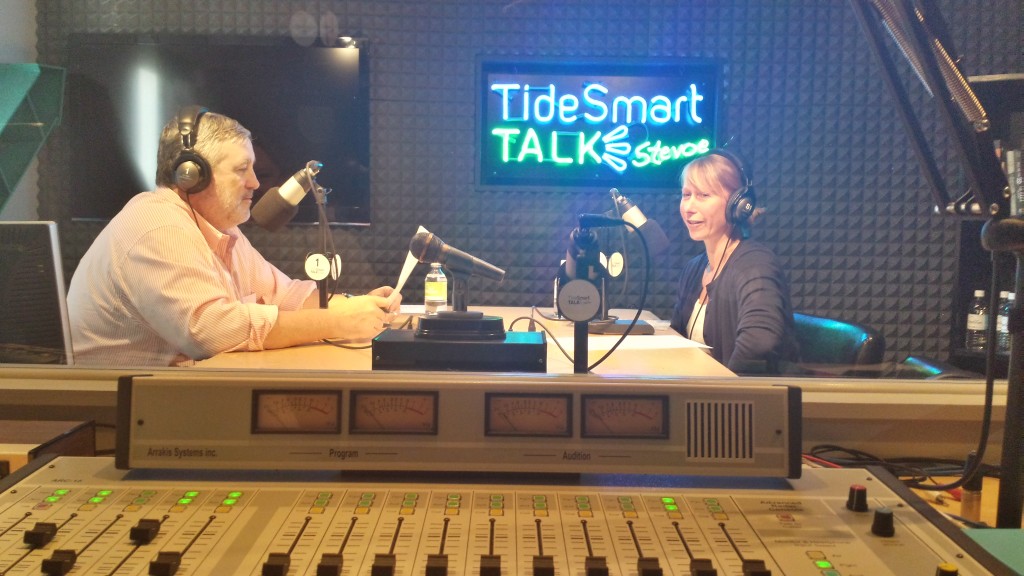 Host of TideSmart Talk with Stevoe, Steve Woods, welcomed Director of the Maine Office of Tourism, Carolann Ouellette (at right).

Carolann Ouellette has always had a passion for the outdoors so after moving to Jackman and opening her own restaurant, she also ended up getting involved with outdoor companies such as New England Outdoor Center, Sugarloaf, and eventually became a board member of the Maine Tourism Association. She took her experience from being a tourist and working in the industry and applied for the position of Deputy Director of the MOT in 2007. In 2011, she was promoted to Director, where she’s been since. The MOT consists of seven employees who’s goal is to make Maine a “premiere four season destination.” While many Mainers may consider the state as such already, the focus is to pull more people into the state in the winter months and also to direct them to parts of the state that aren’t as affected. As it stands, tourism in Maine has a 8 billion dollar impact on the state, with 5.4 billion dollars in direct spending (lodging, travel, recreation, etc.).

Ouellette talked about how they advertise in other markets in order to get people here. She said that most of the state’s tourists come from Massachusetts, with the other New England states following closely. The next biggest market is the Mid-Atlantic region (Virginia/DC/Baltimore) and greater New York City, where they have just started advertising in the last couple years. This last year, their marketing has reached as far as Charlotte, NC. She finds that many visitors come from Eastern Canada where many Mainers also visit, but they do not market in Canada.

The newest marketing campaign for the MOT is that Maine is the place to “follow your inner compass and completely be yourself.” The campaign is focused on story telling, which they call “Telling My Maine Story.” Stevoe pitched his “Maine Story,” talking about his favorite part of the state (Bar Harbor) and the seemingly endless miles of snowmobile and ATV trails. Many people may not know that almost all of Maine’s trails are maintained by volunteers and many are on private property that the owners have allowed the trails to cross. Ouellette stated that there are over 14,000 miles of snowmobile trails alone.

For more information about tourism in Maine, visit the MOT website and subscribe to their quarterly e-mag, “The Maine Thing Quarterly.”