Much of Danny Dalton’s life has been spent in public service, with 18 years in the military followed by 12 years working as a drug agent for the DEA.  Dalton used his recent run for U.S. Senate to highlight what he says is dysfunction in the very federal agencies that employed him.  Dalton sat down with TideSmart Talk with Stevoe host Steve Woods in a wide-ranging interview that covered Dalton’s experience in the military and DEA, reflections on the recent U.S. Senate race, and thoughts on the United States’ military involvement in the Middle East. 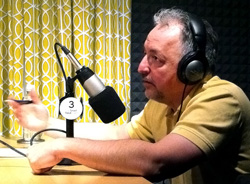 Danny Dalton has spent 18 years in the military, serving with the Air Force, Army and National Guard. He also worked as a special agent for the DEA before his recent run for U.S. Senate.

Danny Dalton grew up in New York and earned his bachelor’s from Embry-Riddle Aeronautical University. He then went on to receive his MBA from Rensselaer Polytechnic Institute in Troy, New York.

Dalton worked as a drug agent for the DEA, both at home and overseas in Latin America and Pakistan. After resigning from the DEA in 2005, he worked in Iraq as a Blackwater contractor, as a Diplomatic Security Supervisor with the Department of State, and then as an intelligence advisor with the Department of Defense identifying and targeting terrorist cells during the surge.

In 2008, after learning from previous coworkers that there was intelligence information not being acted upon, Dalton went to work for three years as a private contractor in Iraq, helping track down terrorists and developing intelligence sources. In 2010, Dalton also worked as a subject matter expert for the Director of Law Enforcement Information Sharing Initiatives at the Department of Homeland Security. He assisted in the development of policies and programs that would facilitate the sharing of information between law enforcement entities.

Danny currently lives in Brunswick and is the owner of small business in Bath that manufactures clothes and toys for major brands. He has three children.