Dr. Dora Mills is the Vice President of Clinical Affairs at the University of New England (UNE).  Mills is a Maine native who was raised in Farmington, and graduated from Mount Blue High School.  While attending Bowdoin College, a professor spoke with her about perhaps starting a career in medicine.  This led Mills to go on and receive her M.D. degree from University of Vermont College of Medicine, and her Master of Public Health from Harvard University. 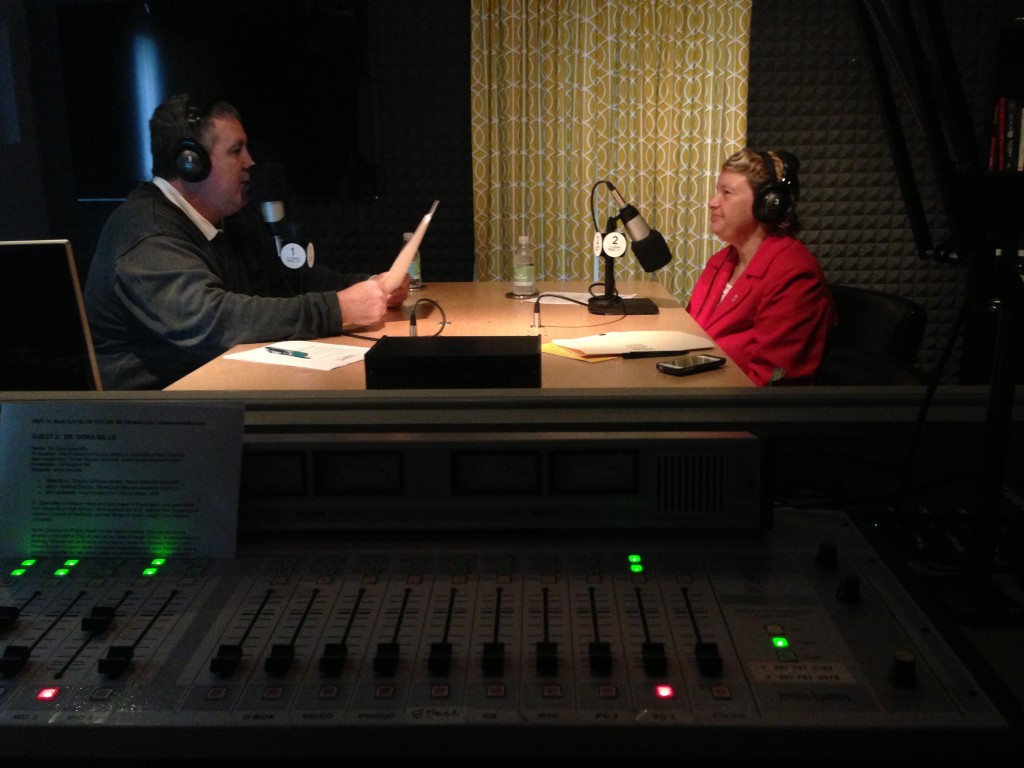 TideSmart Talk with Stevoe host Steve Woods (left) was joined in the studio by Vice President of Clinical Affaris at the University of New England Dr. Dora Mills (right).

From 1996-2011, Mills was the Director for Public Health for the State of Maine.  Mills also served as the director of the Maine CDC, as well as the State’s Health Officer.  A pediatrician by training, Mills served as director of the Maine Center for Disease Control and Prevention for 15 years under Governors Angus King and John Baldacci.  She is widely recognized for her public health accomplishments, including reducing Maine’s rate of tobacco use, teen pregnancy and childhood obesity.  As Maine’s CDC director, she established numerous statewide partnerships with hospitals, agencies and schools, including Healthy Maine Partnerships, which provides public health programs on a local level.  Mills left the Maine CDC in December 2010, shortly after the election of Gov. Paul LePage and the new Republican Legislature, citing the need for a change.

Mills is a board-certified pediatrician who practiced as a hospitalist in Los Angeles.   Mills told Stevoe about her five years spent in L.A. and how she missed Maine and knew she couldn’t put roots down in California.  Mills moved back to Maine and had a pediatric practice in her hometown of Farmington.  She also practiced medicine in several rural international locations, including Tanzania and Nepal.  Mills described for Stevoe her time spent working in a Mennonite Hospital in Tanzania.

In September 2011, Mills became the Vice President of Clinical Affairs at the University of New England (UNE).  Being the leading educator of health care professionals in Maine, UNE has a commitment to a patient-centered approach. With Dr. Mills’ leadership, UNE is prepared to develop clinical education sites that will inform best practices throughout the state.