Dottie Foote is Executive Director at the Community Schools at Opportunity Farm and Camden.  Foote sat down with TideSmart Talk with Stevoe show host Steve Woods to discuss the life experiences that shaped her work, restorative justice, and innovative approaches to high school education. 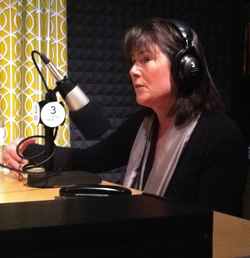 In 1983, after graduating college, Dottie Foote became the only female loan officer at Camden National Bank.  In the mid-80s, her brother was diagnosed with HIV.  He died of AIDS in 1992.  After spending years in the banking industry, nonprofit leadership, and teaching for UMaine, Foote began working on issues of social justice, specifically with issues surrounding HIV/AIDS in rural Maine.

Her work with adolescents over 10 years prior to coming to The Community Schools was in the development of a cutting-edge after-school social justice program for teens aged 14-19 called the Diversity Coalition (DC), for which she still serves as president.   Foote facilitated discussions about HIV/AIDS, harassment, and discrimination in all its forms.

In 2008, Foote joined The Community Schools, an organization serving youth at risk of not completing high school.  In 2011, the school merged with Opportunity Farm to form The Community Schools at Opportunity Farm and Camden. The two organizations united with a goal of encouraging life-long learning and providing students with the skills and experiences necessary to connect with their families, practice personal responsibility, and contribute to their communities.

Foote is active beyond her role at the school, serving as an adjunct professor at the University of Maine and advising the state education commissioner.  She lives in Rockport with her husband, Charlie, and her own adolescent personal trainers, Andrea, Morgan, and William.