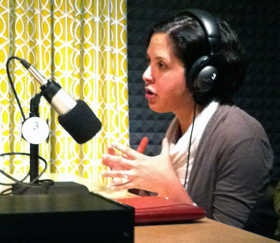 Emily Figdor is the director of the statewide citizen-based environmental advocacy organization Environment Maine.  For the past 15 years, Figdor has worked in Washington to protect the environment and the health of Americans.  Most recently, Figdor directed Environment America and the U.S. Public Interest Research Group’s Federal Global Warming Program.

Figdor sat down with TideSmart Talk host Steve Woods to discuss how she got involved in environmental advocacy and the initiatives Environment Maine is working on in Maine, including its current effort to block a pipeline that would carry tar sands oil to Maine.

She has been quoted regularly on the subject of climate and clean air policy in national media outlets such as The New York TImes, Washington Post and Associated Press.  In 2006, The Hill newspaper ranked Figdor as one of the “top lobbyists” on global warming.

Figdor is on the Board of Directors of the U.S. Climate Action Network and the 1Sky Action Fund.  She lives in Portland with her husband and their two daughters.