Director and Chairman of the Harold Alfond Foundation Greg Powell was in the studio with TideSmart Talk with Stevoe host Steve Woods and the two talked about how Powell was asked by Alfond, while playing a round of golf, to manage his wealth and philanthropy.  Powell also told Stevoe the story of how the Dalai Lama wore a pair of Dexter shoes, which are on display at the Harold Alfond Center for Cancer Care in Augusta.

Greg Powell grew up in Waterville, where the Powell’s were close family friends to the Alfonds.  Powell left Maine to attend Wesleyan University in Middletown, CT, where he was a political science major.  In 1977, Powell attended the University of Maine, School of Law.  This was followed by a clerkship for Maine Supreme Court Justice Ed Godfrey.   Powell then began trial work at Pierce Atwood and litigation at the firm Friedman and Babcock, which led to a 15 year career. 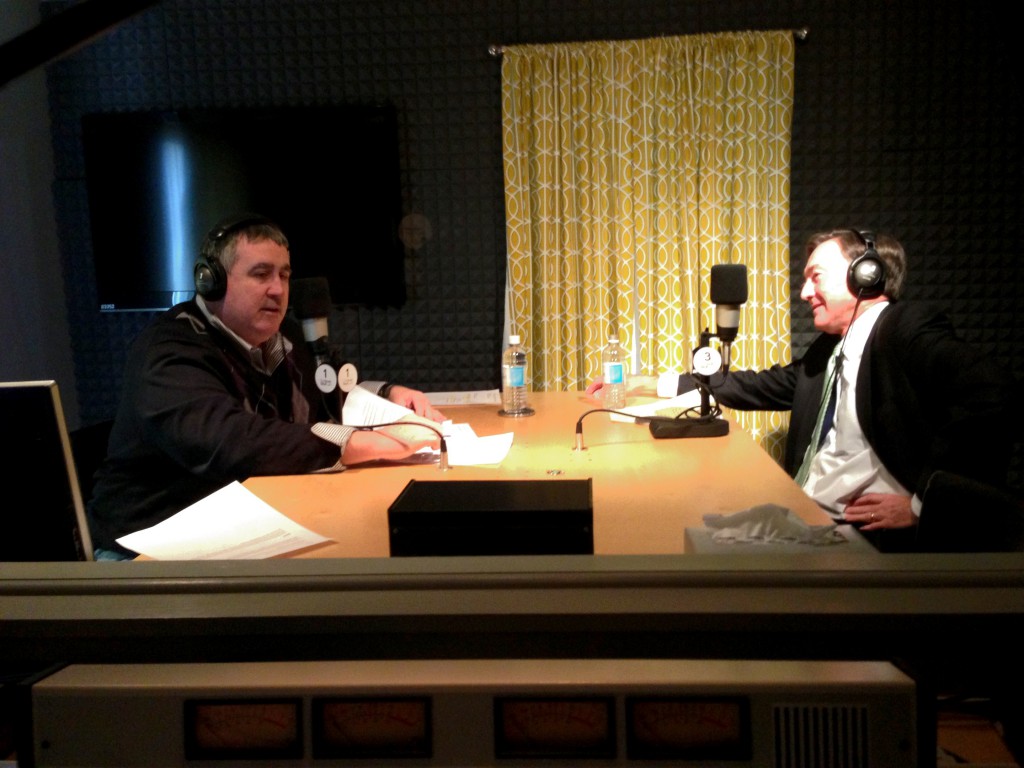 TideSmart Talk with Stevoe host Steve Woods (left) is joined in the studio by Director and Chairman of the Harold Alfond Foundation Greg Powell (right).

Powell currently serves as an officer and trustee of other Alfond family foundations, is a former director of Spinnaker Trust (investment planning), and has served on multiple boards of community organizations and educational institutions, including the University of New England.

In 1996, working with Alfond, Powell founded Dexter Enterprises, Inc. For well over a decade, Powell worked closely with Harold Alfond on all of his charitable projects in Maine and other states.

The Harold Alfond College Challenge is part of Harold Alfond’s legacy, who believed that every Maine baby should have the opportunity to pursue higher education.  At present, 40 percent of Maine families with newborns are enrolled in the program (giving $500 to every baby born in ME), but the foundation is committed to achieving 100 percent participation in coming years.

Founded in 1950, The Harold Alfond Foundation is a private foundation organized as a trust, created under the laws of the State of Maine.  The Foundation is governed by a Board of Trustees, which meets periodically to decide which worthwhile public charities will receive support.  The board consists of individuals, whom Harold Alfond knew well and selected personally.