The Mallett Brothers Band formed in Portland in 2009 and have been been wowing listeners and concert-goers ever since. They have been described as “a six-piece living inferno,” “a sextet featuring world-class chops, vocals and songwriting,” and “one of the most popular and talked about bands in Maine in some years.”

Fronting The Mallett Brothers Band (TMBB) are two sons of legendary singer-songwriter David Mallett. The band is composed of Wally Wenzel, Nate Soule, Nick Leen, Brian Higgins, Luke Mallett and Will Mallett.  The band has been awarded many accolades since forming in 2009. 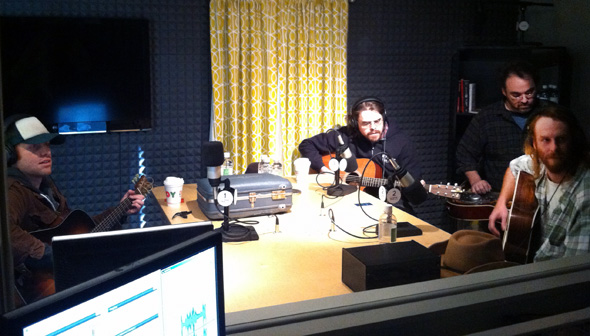 They have been regarded as one of “the hardest touring bands” in New England, with a touring circuit stretching from the northernmost tip of Maine to the deep woods of southern Tennessee.

This sextet draws inspiration from an array of influences including rock and roll, folk, blues, bluegrass, neo-traditional and classic country and even punk. TMBB are best known for high-intensity live performances. They have played national festivals and sold-out venues throughout the Northeastern U.S.

Recently the band ran a grassroots fundraiser for their third album, which they reached 106% of their goal with the help of their loyal fans. 5% of these donations will go to benefit Good Shepherds Food Bank.