Neal Pratt, one of Maine’s top attorneys, joined TideSmart Talk with Stevoe to discuss the growing influence of lawyers within state and national office, transparency in the legal system and plans for Eaton Peabody in Portland.

Neal Pratt is a shareholder and trial lawyer at Eaton Peabody and will be resident in the firm’s Portland office that is scheduled to open in the spring of 2013. In 23 years of practice, Pratt has achieved a remarkable record of trial successes before juries, judges, arbitrators and administrative authorities. His handling of various high profile cases prompted Maine’s largest newspaper to note that “Pratt has earned the reputation as a skilled trial lawyer and top-notch litigator.” 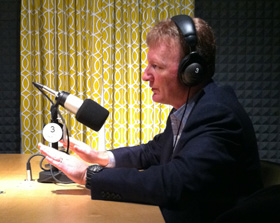 Pratt’s practice concentrates on complex civil litigation, including commercial and construction litigation, product liability and tort defense, and professional liability claims. He also has extensive experience in insurance coverage disputes, employment litigation, and white-collar criminal defense. Among his positions prior to joining Eaton Peabody, Pratt chaired the Trial Department and served as General Counsel to one of Northern New England’s largest law firms.

Pratt’s commitment to community service was recently honored by the Portland Regional Chamber of Commerce, which selected him as the 2012 recipient of its Robert R. Masterton Award for Leadership in Economic Development. As the unprecedented 4-term Chairman of the Board of Trustees of the Cumberland County Civic Center – Maine’s largest arena – Pratt led the successful 2011 bond referendum campaign in which voters approved a $33 million modernization initiative. Pratt also takes great pride in his involvement with youth sports, and from 2010 to 2012 managed the Scarborough Little League All-Star baseball team to a record-setting three consecutive State Championships and two Eastern Regional Tournaments.