TideSmart Talk with Stevoe broadcast its 36th show on November 10.  The first guest, Richard Brewer, is a former Marine who has formed an organization to help educate society about combat veterans and work with those who suffer from PTSD.   In the second hour, Stevoe hosts guest Matt McTighe, campaign manager for Mainers United for Marriage.  The campaign recently won the freedom to marry for same-sex couples in Maine. 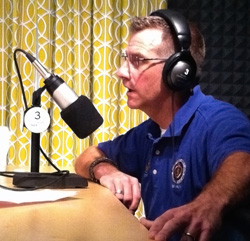 Rich Brewer is a decorated former Marine who now dedicates himself to helping those struggling with PTSD and educating society about combat veterans who are return home.

Brewer was assigned to the American Embassy in Beirut, Lebanon in the early 80s. He was severely wounded by a suicide truck bomb that destroyed the American Embassy. Despite multiple lacerations, burns, shrapnel wounds and a broken arm, Brewer continued to provide support until he lost consciousness and was taken to a local hospital.

After retiring from the Marines, Brewer held many roles, including Massachusetts State Trooper, bodyguard, teacher in Beirut, history teacher at Cheverus High School and patrol officer for the Cumberland Police Department. He has also been a recent contributor to Fox News Channel and CNN.

For 25 years, Brewer suffered in silence with PTSD. Three years ago, he decided to fight back against the war that was raging within him and OneWarriorWon was born. He now speaks at veteran groups on the perils of PTSD and how to overcome PTSD.

For the second year in a row, the U.S. military has lost more troops to suicide than it has to combat in Iraq and Afghanistan. The Department of Veterans Affairs estimates that 18 veterans a day are committing suicide.

Through OneWarriorWon, Brewer is leading the movement to inform and educate the American people about the true multiple, complex issues facing returning combat veterans to their communities and assisting them in integrating into a more caring community and country.

Matt McTighe was the campaign manager for Mainers United for Marriage, the successful campaign to win the freedom to marry for same-sex couples in Maine.

Maine voters recently made history by being the first in the country to approve same-sex marriage by a popular vote.  The 2012 referendum was a reversal of a similar bill, which Gov. Baldacci signed into law three years earlier.  In 2009, opponents succesfully petitioned for a referendum before the law went into effect, and voters rejected the bill.

The 2012 election was a significant step forward for marriage equality, with Maryland and Washington voting to uphold similar laws passed by their legislature and Minnesota voting down a consitiutional amendment that would have defined marriage as being betweeon one man and one woman.

McTighe is a longtime political advocate, with more than 12 years of experience in political strategy, public affairs and electoral campaigning.

McTighe is active in the York community where he serves as a volunteer firefighter and was recently named Firefighter of the Year.  He is an avid hockey player and lifelong Bruins fan.