Senator George Mitchell was born in Waterville, Maine.  Mitchell received an undergraduate degree from Bowdoin College and a law degree from the Georgetown University Law Center.  He served in Berlin, Germany, as an officer in the U.S. Army Counter-Intelligence Corps from 1954 to 1956.

From 1960 to 1962, Mitchell was a trial lawyer in the Justice Department in Washington, DC.  From 1962 to 1965 he served as executive assistant to Senator Edmund S. Muskie.  In 1965 he returned to Maine where he engaged in the private practice of law in Portland until 1977.  He was then appointed U.S. attorney for Maine, a position he held until 1979, when he was appointed U.S. District Judge for Maine. 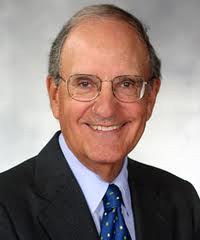 Image courtesy of the Mitchell Institute

Mitchell resigned as U.S. District Judge for Maine in 1980 and was appointed to the United States Senate to complete the unexpired term of Senator Edmund S. Muskie, who resigned to become Secretary of State.  He was elected to a full term in the Senate in 1982.  Senator Mitchell went on to an renowned career in the Senate spanning 15 years.  Mitchell told Stevoe that it was through the influence of Senator Edmund Muskie that he became involved in politics.

In 1986, he chaired the Democratic Senate Campaign Committee, and was instrumental in his party’s regaining the majority in the Senate.  Mitchell himself was reelected in 1988 with 81 percent of the vote, the largest margin in the history of the state of Maine.

From 1989 to 1995 Mitchell served as Senate Majority Leader.  While in this role, Mitchell led the movement to reauthorize the Clean Air Act in 1990 and pass the Americans with Disabilities Act of 1990.  Additionally, under his leadership, the Senate approved the North American Free Trade Agreement and the formation of the World Trade Organization.

In 1994, he turned down an appointment by President Bill Clinton to the United States Supreme Court, to replace the retiring Harry A. Blackmun.  Mitchell did not run for reelection in 1994.

Senator Mitchell is the founder of the Mitchell Institute, in Portland, Maine, whose mission is to increase the likelihood that young people from every community in Maine will aspire to, pursue and achieve a college education.  Mitchell discussed with Stevoe what prompted him to establish the scholarship, which each year provides a college scholarship to one student from every high school in Maine.   Mitchell said that his goal in life is that “not one child in Maine will be denied the opportunity of a college education purely for financial reasons.”