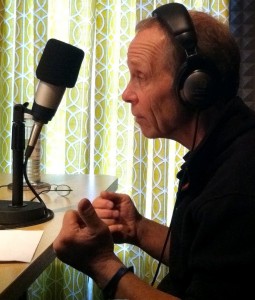 Maine broadcaster John Williams joins Stevoe in studio to discuss his career and thoughts on the future of radio.

For some, the experience of a radio interview can be somewhat nerve racking, but when you’ve spent the last 30 years recording more than 50 programs for radio stations in four different states, being in front of a microphone becomes second nature. Longtime Maine broadcaster John Williams joined Stevoe in studio for the first segment to discuss his career and thoughts on the future of radio.

With more than 22 years of broadcasting throughout the northeast, Williams and his company, Williams Broadcasting has developed a variety of programming, covering everything from ski and board reports, motor racing, financial stock reports to outdoor adventure segments.

In discussing the future of radio, Williams stresses the value that local radio provides for its listeners.

“When you are able to articulate local radio programming, that creates a bond between the listener and the people that are listening,” the longtime broadcaster says.  “When it comes to local radio programing, I think it is actually making a comeback now because of the sense that people are being able to connect directly with (the broadcasters).”

A Maine native, Williams is owner of Williams Broadcasting, a major producer of unique radio programming.

Williams’ career in broadcasting began 30 years ago with a Ski Report service he provided for the North Country Ski & Board Reports.  That experience sparked a passion for broadcast media which led him to establish Williams Broadcasting in 1990.

The company specializes in the development of short-format programming for radio and television.  Williams Broadcasting provides programming for more than 50 radio stations and networks across Maine, New Hampshire, Vermont, and Massachusetts.

Williams produces “In The Pits,” Maine’s only live motorsports talk show, which is eight years running on 96.3 WJAB.

An ordained minister, Williams lives on a farm in North Norway where he and his wife raise sheep, have two dogs and seven cats. 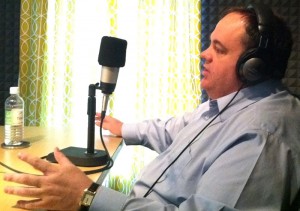 Jon Jennings talks about his career in basketball and politics.

In addition to an interview with John Williams, Stevoe was joined for an in-studio discussion with Maine Red Claws Co-owner and President/GM, Jon Jennings.  The two discussed Jennings’ effort to bring NBA Development League basketball to Maine, his time as an assistant coach and executive with the Boston Celtics, his time working in the White House and updates on The Forefront at Thompson’s Point project.

Jennings grew up in Indiana with a passion for basketball, developing a keen ability to read the game like few others.  While attending the University of Indiana, he was student manager for the basketball team.  Prior to graduating, Jennings also worked for the NBA’s Indiana Pacers as a scout.

He joined the Boston Celtics in 1986, starting as a scout, and then becoming an assistant coach where he worked closely with legends Kevin McHale and Larry Bird. Jennings later became director of basketball development for the Celtics.

In 1997 Jennings switched gears, pursuing a prestigious political career. He worked in the United States Senate and held multiple senior-level positions in government in Washington, DC. Jennings worked at the U.S. Department of Justice where he served as the Acting Assistant Attorney General and Principal Deputy Attorney General for the Office of Legislative Affairs from April 1999 to June 2000. Prior to his position at the Justice Department, Jennings served as Senior Assistant to the Cabinet Secretary and Director of Policy Coordination at the White House from 1998-1999, and he held a position as a White House Fellow in the Office of Cabinet Affairs from 1997-1998.

In 2009 he returned to basketball, accepting a position as co-owner and GM/president of the NBA D-Leagues Maine Red Claws, official minor league affiliate of the Boston Celtics, Charlotte Bobcats and Philadelphia 76ers. When deciding which New England city would be the best home for the Claws, Jennings traveled throughout New England and after a lengthy conversation with then Maine Gov. John Baldacci, he turned his focus to Maine.

“Once I found out that Maine had that phenomenal history of high school basketball, I knew we had the basis of being able to make a professional team work,” he said.

In 2010, Jennings received the inaugural NBA Development League Executive of the Year Award in recognition of his efforts to bring the Red Claws to Maine, as well as the franchise’s success. The Claws sold out the inaugural season, led the league in merchandise sales and ticket revenue and were among the top teams in sponsorship revenue.

In the fall of 2011, Stevoe, who is also a former NBA and MLB player agent, joined the Maine Red Claws as one of its owners, calling it “one of the most civic and giving organizations in Maine.”

Stevoe is also an investor and partner at The Forefront at Thompson’s Point project, working alongside Jennings and the partnership group to develop the largest commercial, hotel and sports venue complex in Maine.

The Forefront at Thompson’s Point project would also provide a 3,500 seat arena for the Maine Red Claws and other sporting events.  During the interview, Jennings gave the listeners an updates on the progress of the project, which has its final planning board public hearing scheduled for June 5.

“We’re excited to get to that point and answer all the questions and hopefully, with a positive vote out of the planning board, we’ll be able to move into a construction phase,” he said.

Jennings is an active community member, serving on the board of directors at Mercy Hospital, the Boys & Girls Clubs of Southern Maine, the Portland Business Advisory Council for the City of Portland and the Maine Sports Hall of Fame.