Celtics legend and 2-time NBA Champion Dave Cowens came to the studio on Saturday, August 4, to join Stevoe in a discussion about today’s athletics, his experience in the NBA, and their shared love for the beautiful state of Maine.

Stevoe (left) and Dave Cowens (right) talk about their love of Maine and sports.

A 2-time NBA champion with the Boston Celtics and 7-time all star, 6’9” Dave Cowens earned a space in the Hall of Fame in 1991. A tremendous work ethic, combined with unselfishness, versatility and energy helped established Cowens as one of the most solid and respected centers in recent NBA history.

During his career, Cowens averaged 17.6 points and 13.6 rebounds per game. He
was a member of the Celtics’ 1974 and 1976 NBA Championship teams. After retiring in 1980, he was coaxed to return to the court two years later to play for the Milwaukee Bucks from 1982-1983. Cowens went on to coach the Charlotte Hornets and Golden State Warriors. 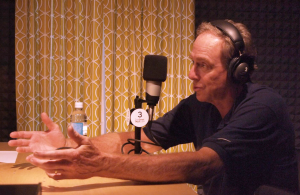 Cowens now lives in Maine and does corporate work for the Celtics and TV work for Comcast. Cowens is involved with the Sports Museum of New England, the National Basketball Retired Players Association, and his Dave Cowens Basketball School in Norton, Mass. Cowens is also involved in several New England charities.

In this segment, Cowens talks about his journey from being a “Dennis the Menis” from the mid-west to a basketball all-star in the NBA. Stevoe and Cowens also discuss how media coverage of basketball has evolved, and their thoughts on Title Nine of the1972 Education Amendments.