Miss Maine 2012 Rani Williamson joined Stevoe in the TideSmart Studio August 18th to share her journey in competeing for the Miss USA title and to talk about her experiences serving as a role model for girls throughout the state. 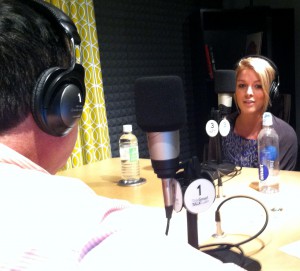 Growing up in Cumberland, ME, Rani Williamson always loved being in front of the camera, even modeling for an L.L.Bean kids catalog.

As Williamson grew up, she was influenced by French culture, having twice visited the country and also studied abroad in Cannes, France. During her time abroad, Williamson studied French and art, and she returned to Maine the next year, graduating from the University of Southern Maine with a degree in Communications.

Shortly after graduating, Williamson left Maine for Manhattan, to work as an e-commerce/social media specialist at a marketing firm.

After being crowned Miss Maine in the fall, Williamson also competed in the Miss USA pageant. She spent three weeks in Las Vegas with 50 other girls, all chasing a common goal. In this competition, she ranked among the top 16 pageant contestants.

In her interview with Stevoe, Williamson talks about how she went from being a tom-boy to competing in pageants, her suprised reaction to being crowned Miss Maine, and her experience meeting Donald Trump.