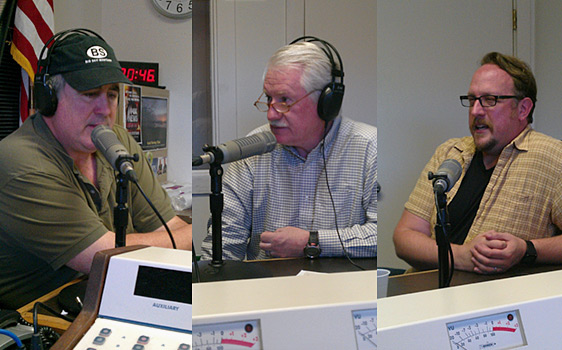 Show 3: Stevoe on the mic with Bill Green and Charles Terhune

Bill Green is a broadcast journalism legend in the state of Maine with a career that has spanned forty years and entertained multiple generations of Mainers. As a sports anchor and then as host of “Bill Green’s Maine,” his feature story reporting celebrates so much of what makes this a great state to live, work and play.

Born in Bangor and educated at the University of Maine, Bill Green is a lifelong Mainer. As a freshman at UMaine, he worked as a cameraman at WLBZ 2 on Eddie Driscoll’s “My Backyard” and “Dialing for Dollars” shows.

Green recalls, “The first night I worked, March 17, 1972, I was asked to stay late and run camera for the news. As they played the opening music and the camera light came on, I remember thinking, I’m going to do this until I’m 65.”

He became a sports anchor at WLBZ 2, and eventually moved to WCSH-TV in Portland. During this period, Green began to flourish as a feature reporter and developed an expertise in recreation and the outdoors. Forty years later, he’s still in front of the camera as host of “Bill Green’s Maine,” which airs Saturday nights at 7 p.m. and has become the most-watched show in its time period in the state.

Among his many interesting life experiences, which include climbing Mt. Katahdin three times, parachuting and SCUBA diving, Bill was also a bone marrow donor to a young girl who lives Michigan. He is also a Registered Maine Guide. Bill and his wife Pam reside in Cumberland. They have two children, Sam and Emily.

Charlie Terhune grew up making frequent trips to Portland to visit family, and in 2006, he moved from Boston to Portland and opened up Portland Power Yoga. Since then, he and wife Alice have grown Maine’s first and only Power Vinyasa Yoga studio into one of the premier studios in the area.

After many family trips to Portland, ME, Charles (“Charlie”) Terhune moved with wife Alice from Boston, MA to open Portland Power Yoga in 2006. During the first year of operation, Charlie and wife Alice did all of the teaching.

Word of mouth helped grow the business, which saw 1,500 students in its first year. Today, Portland Power Yoga has 15 employees and 20 sevateers (work exchange volunteers) who are dedicated and committed to the discipline of Power Vinyasa Yoga as a vehicle for self-discovery, health and well-being.

Power Vinyasa Yoga is a style of yoga practiced in a heated room. In this practice you sweat, stretch and move through a sequence of vigourous and uplifting asanas (yoga poses). Your breath, aided by the lungs (the body’s major organs of elimination) helps detoxify the muscle tissue while squeezing tension out of the nervous system.

Over the last 5 years, Portland Power Yoga has grown by leaps and bounds. In it’s 5th year of operation, the studio moved to a bigger location at 84 Cove Street, partnering with Hara Holistic Health to provide Portland with yoga instruction in tandem with the highly regarded bodywork services of Hara Holistic Health.

Terhune advocates that yoga is not just for skinny, young, flexible men or women. At 6’6”, Terhune has experience moving and twisting his large body on a small amount of mat, and even hosts a men-only three-hour workshop called “Real Men Do Yoga.”