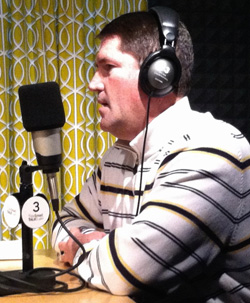 Jim Libby holds a Ph.D. in Public Policy for Education, which he earned from The University of Maine, Orono. He served in the Maine State Senate from 1996 to 2000 and the Maine House of Representatives from 1992-1996. Libby was a GOP gubernatorial primary candidate in 2002, garnering 33% of the vote. The former state representative and Thomas College Business Chair sat down with Steve Woods to discuss his experience in politics, education reform, thoughts on Gov. LePage and the Maine political landscape.

He has served on the board of directors for the Southern Maine Area Agency on Aging and for the Jobs for Maine’s Graduates Program. He is a former political consultant for WGAN Radio in Portland. Libby’s current appointments include trusteeships with the Maine Community College System and the Waterville Opera House.

Libby has authored several books and editorial content. Some of his notable works include, “Super U: The History and Politics of the University of Maine System”, and the 2009 publication entitled “Buxton”. He has also written pieces such as “Bond ratings and market instability”, discussing market effect on Maine. He is currently writing a book called “Hollis.”

Libby lives in Buxton with his wife Jenny and their two children, Grace and Brett. In his free time, Jim enjoys researching and writing about local history, travelling, and listening to Billy Joel or Frank Sinatra.