Mills, who spent 32 years as an attorney and 16 years in the Maine State Legislature, talked about election reform, Maine’s political climate, the Maine Turnpike Authority and his “obsession” with public service. Woods and Mills also discussed Maine’s infrastructure challenges as it relates to economic prosperity. 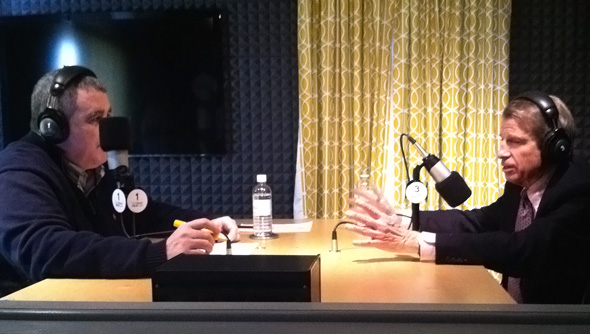 “Maine is a large state which has grown organically into uneven population distribution, which poses significant economic challenges for our vast infrastructure and essential government services,” Woods said. “Thoughtful strategies tied to encouraging more financially sustainable communities throughout the state will help create a shared economic prosperity for all Mainers.”

Since graduating with honors from Maine Law School in 1973, he has devoted 32 years to resolving legal problems for Maine people. For 23 years, he has owned Wright & Mills, a law firm in Skowhegan. Mills is a founding member of the Somerset Economic Development Corporation and a founding member of FirstPark, a successful business enterprise that is bringing over 700 jobs to central Maine.

During 16 years in the Legislature, Mills has served as a Republican lead on Tax, Labor, Judiciary and Appropriations Committees. Mills worked with both parties to pass significant reforms in health care and education.

Mills made two unsuccessful bids for the Blaine House.  In 2006, he lost the Republican primary to Chandler Woodcock, who lost to incumbent John Baldacci.   Mills finished third in the 2010 Republican primary behind eventual winner Paul LePage.

In 2011, Gov. Paul LePage appointed Mills to be the Executive Director of the Maine Turnpike Authority where he would replace Paul Violette, who resigned amid questions about the authority’s spending practices.