TideSmart Talk with Stevoe continued on Saturday, March 10 with a round table on Maine outdoor recreation, followed by business and leadership discussion. In the first hour, Host Steve Woods (Stevoe) talks about why he decided to run for U.S. Senate, and what he thinks is the biggest problem that we face as a country today.

In the first hour, Stevoe is joined in studio by Russell Walters and Dave Herring to talk Maine outdoor recreation. Walters has more than 30 years of experience in the adventure industry and he is currently president of Northern Outdoors, a four-season adventure resort in western Maine.

Herring is Executive Director of Maine Huts & Trails, a nonprofit organization with three backcountry eco-lodges in western Maine and 45 miles of trails.

These two outdoor recreation experts discuss ways that Northern Outdoors and Maine Huts & Trails work together to develop recreation packages that attract new guests for everything from Maine whitewater rafting to overnight hiking adventures. Support from the state has been key to growing Maine’s reputation as a premier outdoor recreation destination, Walters says. 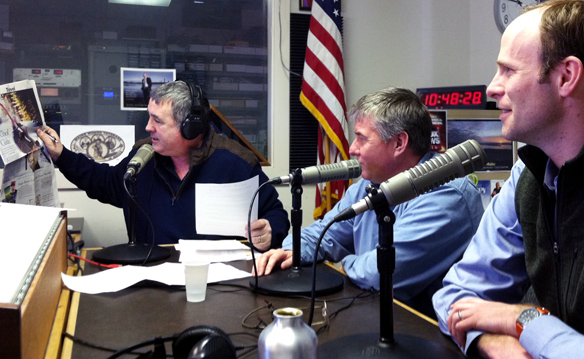 “We’ve seen nothing but support for the tourism budget and the activities of the Office of Tourism,” Walters says.  “I think there is a move afoot to try to expand the reach of that state marketing to appeal to people further afield.”

Those efforts were bolstered by a recent New York Times article highlighting Maine Huts & Trails, which generated the largest spike in web traffic for the organization. The story has also raised questions about the writer, Eric Hansen, who went to college in Maine (and is an Outside Magazine contributing editor) and seemed unprepared for the trip (forgot a map, sleeping bag, headlamp).  Herring says despite some of Hansen’s oversights, the article was great exposure for Maine Huts & Trails.

“I think he wrote it that way to spark interest for the entertainment value, although he clearly was somewhat unprepared,” Herring says.  “It kind of made you scratch your head a bit.”

In the second hour, Stevoe is joined by renowned business executive Dennis Carey, who has held senior-level positions at multiple Fortune 100 companies. Carey spent more than 20 years at GE where he became Vice President and CFO of GE Appliances. Carey later served as CFO of The Home Depot. In 2002, Carey became CEO of 8 Motorola businesses, overseeing $2.7 billion in revenue.

Carey talks about the human dimensions of big business and the differences between business cultures at GE, The Home Depot and other companies.

He also shares advice for bringing people together to be both efficient and effective.

“People really want to be winners, and you’ve got to give them a process, and celebrate when they have good ideas,” Carey says, adding that he has in the past brought employees into the company board room to celebrate individual ideas, passion and success.

A graduate of the University of Maine Business School and a current member of its board, Carey also talks about his thoughts on educating the next crop of business leaders.

Also in the show’s second hour, Stevoe talks with entrepreneur Fred Forsley, President of Shipyard Brewing Company. Forsley grew Shipyard out of the Kennebunkport Brewing Company and Federal Jack’s Restaurant and Brew Pub into one of the largest microbreweries in the country.

Forsley talks about how he started Shipyard Brewing Company and why he thinks Maine has become home to so many successful microbreweries.  The Gray, Maine native also shares what he believes makes Maine special.