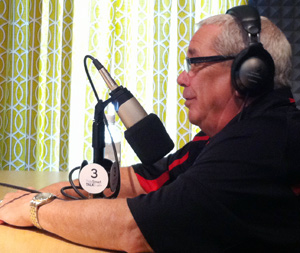 As an anchor on WCSH 6, Glaiser was a part of the longest running anchor team in the country (20 years, Pat Callaghan, Cindy Williams, Joe Cupo, Bruce Glasier).

For 35 years, Bruce Glasier has been the voice and face of sports in Maine, reporting on everything from standout student-athletes to Super Bowl heroics, spring training to historic World Series, and just about everything in between.

As a long-time sports director for WCSH 6, Glasier received much recognition for his work in broadcasting, including several Maine Association of Broadcasters honors, Associated Press awards, New Hampshire’s “Golden Mike” award for reporting and anchoring and Maine Sportscaster of the Year.

Glasier joined Stevoe to talk about how he got into sports broadcasting, what it was like to meet the likes of Muhammad Ali and Ted Williams, the future of local TV news, and plans for retirement.

For the past 20 years, Al Bean has overseen all aspects of intercollegiate athletics at the University of Southern Maine, serving as its director of athletics. From recruiting to long-range planning, compliance and eligibility to marketing and promotion, Bean has earned numerous awards while overseeing the Huskies’ 22 intercollegiate sports.

Bean joined TideSmart Talk with Stevoe to talk about issues surrounding college athletics including the evolution of parental involvement, recruiting and media treatment of athletes.