TideSmart Talk with Stevoe broadcast its first show for the month of June with a discussion about higher education and its impact in the state of Maine. University of New England (UNE) President Danielle Ripich joined host Stevoe to share her perspective. 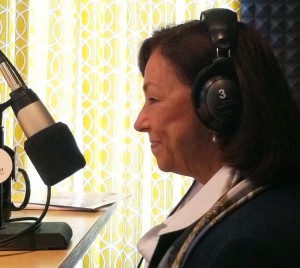 A May 2011 cover story in Maine Ahead magazine called UNE President Danielle Ripich “the powerhouse behind Maine’s largest private university,” and Mainebiz named her a 2011 “Woman to Watch.”

Danielle N. Ripich, Ph.D. is University of New England’s fifth president. Under her leadership the University has seen significant growth, including the launch of a College of Pharmacy, College of Graduate Studies, and College of Dental Medicine (opening in 2013), as well as four Centers of Excellence for Research and Scholarship. A UNE campus in Morocco is slated to open in 2013.

Prior to UNE, Dr. Ripich was the Dean of the College of Health Professions at the Medical University of South Carolina, where she was also a professor in the university’s College of Medicine. She is internationally known for her language research and is widely recognized for her work in child language and with Alzheimer’s disease and other forms of dementia. She has written extensively in her field, including edited books, several book chapters, manuscripts in peer-reviewed journals, and has served as an editorial consultant to numerous medical and language journals.

In this 1-hour interview, Ripich talks about how she got involved in education, recent growth at UNE, and plans for the next 5 years.  Stevoe and Ripich also discuss ways to incorporate civics into high school curriculum.