Jim Melcher, political guru and Associate Professor of Political Science, came to the studio to share his passion of politics and humor with Stevoe in a show that aired Saturday, July 7. 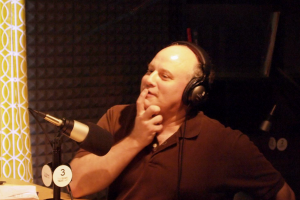 Jim Melcher joins Stevoe for a comical discussion on politics.

Jim Melcher has been interested in politics since he was a five-year-old boy in Madison, Wis. following the Nixon-Humphrey presidential election of 1968. At the age of 13 he became active in politics, handing out Jimmy Carter literature at football games, and he now continues to carry his passion with him as he teaches political science classes at the University of Maine in Farmington.

Melcher is well known for his classroom motto borrowed from the children’s magazine Highlights, “Fun—with a purpose.” His unconventional methods of teaching have proven to be successful—six of his former students have either run for or have been elected to state office in the past four years.

In this segment, Stevoe and Melcher discuss the U.S. Senate race, civility and subjectivity in politics, and civil responsibility.