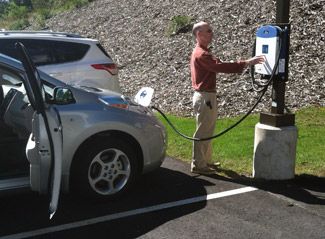 On September 18, Maine TV news stations WCSH6 and WLBZ2 ran a story about the new TideSmart Global electric car charging station in Falmouth.  The next afternoon, Marc Lausier stopped by and became the first person to use the new EV station.  It turns out this is just one of many “firsts” for Lausier, who was one of the first people in the state of Maine to own an electric powered vehicle.

Prior to the interview, Lausier offered Stevoe a test drive of his prize possession, a fully-electric Nissan LEAF.

Marc Lausier is a retired pharmacist, living in Scarborough, Maine.  He is an advocate for the adoption of electric vehicles for their benefits to the    environment and to reduce America’s dependence on foreign oil.

Lausier has written dozens of letters to elected officials in support of clean vehicle technology.  Nicknamed “Gadge” (short for Gadget) for the number of gadgets he brought to work each day, Lausier now has what he says is the best “gadget” he has ever owned.

In this segment, Lausier discusses how he acquired the first Nissan LEAF in Maine and how he sees the industry evolving over time. 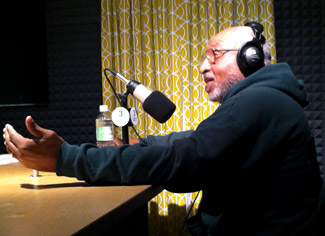 Special Advisor to Seeds of Peace and Director of its Maine Seeds Program Tim Wilson has a career that spans more than 50 years, with work in athletic coaching, public service and leadership.

Tim Wilson has more than 50 years of experience in education, public service and athletic coaching. He serves as Special Advisor to Seeds of Peace, an organization that he has been with since its founding in 1993, and Director of its Maine Seeds Program. Until 2006, he was the Director of both the Seeds of Peace International Camp in Maine and the Seeds of Peace Center for Coexistence in Jerusalem.

Seeds of Peace provides exceptional young people and educators from regions of conflict with an otherwise impossible opportunity to meet their historic enemies face-to-face at an international camp in Otisfield, Maine.  The organization’s mission is to build new generations of leaders with the skills to be peacemakers.

Wilson has been appointed by three Maine Governors to posts including Chair of the Maine Human Rights Commission, State Ombudsman, and Associate Commissioner of Programming for the Department of Mental Health, Mental Retardation & Corrections. He also served as Director of the State Offices of Community Services, Civil Emergency Preparedness, and Energy.  Wilson also coached football at The University of Maine.

In this second segment, Wilson talks about how he came to Maine and got involved in a life of public service, living in Maine as an African American in the 60s and the philosophy of Seeds of Peace.