Tim Sample, Maine’s native humorist, was born in Fort Fairfield and raised in Boothbay Harbor (or as Sample would pronounce it, “Boothbay Hah-bah”).  Sample told Stevoe how at a young age memorizing and mimicing came easily and he enjoyed making people laugh.  Sample’s first album of Downeast humor was recorded in 1979 and produced by Noel Paul Stookey, “Paul” of Peter, Paul, and Mary. 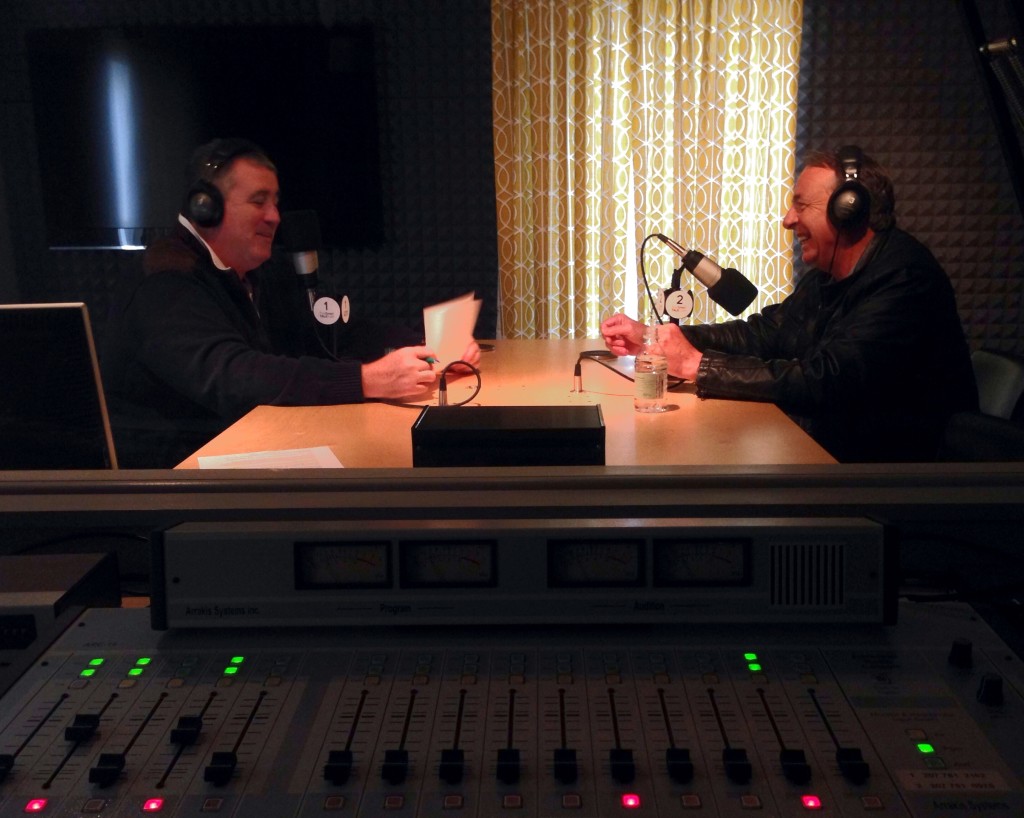 Steve Woods (left) host of TideSmart Talk with Stevoe in the studio with the hilarious Maine humorist Tim Sample (right).

Sample was inspired and mentored by Marshall Dodge, who along with his partner, Robert Bryan, created the world-famous “Bert and I” recordings back in the 1950s.   Sample toured with Dodge throughout Maine in the early 1980s.  After Dodge’s death in 1982, Sample recorded four albums and a video for the “Bert and I” company.  Sample and Bryan have collaborated on a number of projects, including several TV specials, the popular recording “How to Talk Yankee”, and the TV specials “Out of Season” and “Maine Humor Behind the Barn”.

Personally recruited by Charles Kuralt in the summer 1993, Sample became a regular correspondent for CBS News Sunday Morning.  Between 1993 and 2004, CBS broadcast about 100 of Sample’s “Postcards from Maine” essays to a national audience of several million viewers.

Sample has also written and/or illustrated over a dozen books, including regional bestsellers “Saturday Night at Moody’s Diner” and his most recent “Maine Curiosities”, co-authored by Stephen Bither.  Sample has narrated award-winning films and books on tape, including Robert McCloskey’s children’s classic “Bert Dow, Deep Water Man” and Stephen King’s “The Sun Dog”.  Sample told Stevoe how his column “Stories I Never Told You” may lead to a manuscript.

The Bert and I Company released the first new collection of “Bert and I” stories in 30 years.  “Bert and I…Rebooted” brings together Bob Bryan, founder of “Bert and I”, and Sample for the first time since they released “How to Talk Yankee” in 1983. The 22 tales on this CD — including a brand new Bert and I “Bluebird” story — are in the tradition of the stories from the original four Bert and I albums made by Bob Bryan and Marshall Dodge.